COMSATS University Islamabad (CUI), a leading Degree Awarding Institution of higher education in Pakistan, is among the Centers of Excellence of Commission on Science and Technology for Sustainable Development in the South (COMSATS) www.comsats.org.

Established in 1998, CUI is one of the fast growing research - based institutions in Pakistan, with a wide range of academic programs (ranging from basic sciences to cutting edge emerging technologies) and a network of inter-disciplinary research centers making it an ideal place for higher studies leading to MS and PhD degrees.

Since its establishment, CUI has made multi-faceted growth in terms of campuses (currently it has eight fully functional campuses), number of students, faculty members, academic programs, research output, and public outreach, to accomplish its three-fold stated mission, i.e., Research and Discovery, Teaching and Learning, and Outreach and Public Service, which makes it a popular choice for undergraduate as well as graduate programs. Further, CUI is currently ranked at Number 03 position in General Universities of Pakistan, at Number 01 position in Computer Science and IT and has also been ranked Number 02 in Research Productivity in Pakistan as announced by Higher Education Commission (HEC Ranking 2015, issued in February 2016). Recently, CUI has also been ranked among top 250 Asian Universities as well.

As per QS Universities ranking COMSATS was the second best Pakistani university on the list, claiming a place in the 401-450 band in the engineering and technology broad category. The university scored highly for the number of citations per paper and academic reputation.

During the last 15 years, CUI has witnessed a phenomenal growth to an extent that it would perhaps not be out of place to say that CUI has been one of the fastest growing educational institutions of the decade. All through these years, various external bodies have evaluated CUI and the quality of its programs, based on very stringent quality and professional standards. The most important independent entities and regulatory bodies evaluating CUI and its programs are the Higher Education Commission (HEC), the Pakistan Engineering Council (PEC), National Computing Education Accreditation Council (NCEAC), and the Institute of Scientific Information (ISI) Web of Knowledge.

It is a matter of pride for the CUI that it has been able to record remarkable achievements in terms of ranking of its Engineering degree programs as well as research productivity of the faculty members.

The various rankings, year wise are listed below for the interest of CUI stakeholders.

In February 2016, University Rankings for the year 2015 were announced by HEC. CUI has been ranked at No.3 in the General Category, and at No. 6 in overall universities within Pakistan as ranked by HEC.

In May 2015, University Rankings for the year 2014 were announced by HEC. CUI has been ranked at No.2 in the General Category, and at No. 4 in overall universities within Pakistan as ranked by HE.

Besides, CUI earned an overall 3 stars rating out of a total of Five by QS. Click here for details.

At CUI, faculty members and students are quite active in research in their respective fields. To encourage the research environment at CUI, the management facilitates the faculty and students by providing facilities and incentives. The total number of research articles published by CUI faculty till 2018 are 11,000. The detail of research publications year-wise is as under: 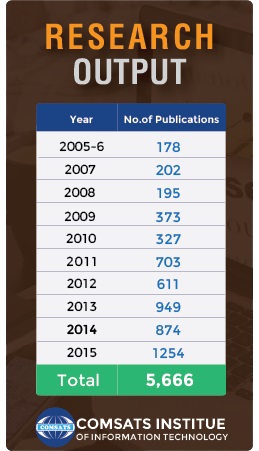 CUI has proudly produced more than 61,000 graduates since its inception until to-date, which includes 315 PhD graduates as well. So far, 128 convocations have been organized. 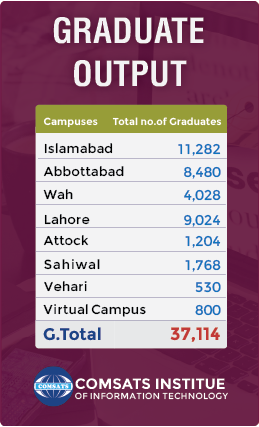